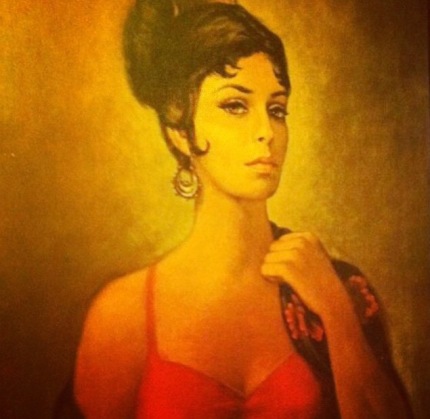 He was not one to paint portraits.

He could, if pressed, push and pull the paint around the canvas to create an image of the person he saw.

But the work never moved him inside. It was a lifeless effort for him. One that paid the bills or pleased a friend but for him, the exercise was generally filled with emptiness.

He wanted to capture something else. To find hidden grace, for instance, in a car abandoned along the road was his specialty. To place onto the canvas the feeling he had when he saw such things. To make the viewer also wonder, like him, about the miles traveled and those that it carried and why, now, it sat alone on a city street, a hulk of once limitless freedom and power slowly falling apart.

She came in on slow day. He was considering leaving early to meet friends for drinks when she quietly slipped in through the door.

“I’m sorry,” she said. “I just pass by all the time. Today, I thought, I would slip into your studio and see the paintings from the inside today.”

He watched her as she slowly prowl through his makeshift gallery. She would ask why he painted what he did. She complimented him. She was polite. She looked over his work with a careful eye. She noticed things in the painting, parts of him, that others never saw before.

“Do you do portraits?” she finally said.

“I’ve always wanted one done,” she said. “I like what you capture. Will you… consider it?”

“Sure, Come by tomorrow morning and we can discuss it,” he said.

She smiled. The splash of joy from her face spilled across the floor, reaching him and slowly… steadily… warming him.

He watched her leave and instantly regretted having to wait until the next day to see her again.

She arrived early, dressed in faded blue jeans that hugged her legs and featured small holes in her knees. A thin white t-shirt clung to her with the faded image of Mickey Mouse splashed across the front. Her hair was slightly wild and it framed her sharp features perfectly. Her make up was minimal. Just small splashes of color that highlighted who she was.

“Well, most people never really do. But, you… You look very nice,” he said.

“I thought about getting dressed up.” she said. “But, well, these are my favorite jeans. I’ve had them for a long time.”

“Not really,” she said. “A friend gave this to me. He said, at the time, that when he saw the shirt he wanted to become the cloth. Like… he wanted to cling to me softly. I’m weird. He’s strange. Anyway…”

“No, I like that,” he said. “You obviously picked the right things to wear.”

“No problem. This can be done.”

He made various sketches from different angles. He placed her gently in different poses. He took pictures of her in different light conditions. He spoke softly. She felt as if he breathed her in while he asked her questions about who she was and what she did and what she loved, hated, wanted and needed.

It took most of the morning and, finally, he suggested lunch.

At a café near his studio he watched her carefully as she ate a salad. He studied how she held her fork. He memorized how her face shifted when she laughed at his jokes or thought about his questions. She was private. She was slightly reserved. But there was that warmth to her. She carried this brilliance about her. It was a natural, simple beauty.

They agree to a price. He would not need her again. He would work alone on her portrait. She left.

He shook his head. She remained deep inside of him. He was fixated.

As he started something began to turn deep inside of him. This was not the tedious exercise he had endured in the past.

The way she said words like “nervous” and “excited” and “I like this” became a soundtrack for his work.

He found in the paint the same richness she spoke of when she sampled a sliver of dark at the café. He worked painstakingly on every aspect of his vision. He wondered allowed about when she fell in love with those faded jeans and who else fell in love with how she looked in them.

Her eyes were so complicated. That odd mix of cheer and depth of knowing took him a whole day to capture. As he finished her lips he found himself longing to know if they felt as soft as he had painted them.

And he knew, yes, he really knew, exactly what that boy meant when he said he wanted nothing more than to be that soft, thin cotton clinging to her skin.

She looked lean and almost cat like as he painted her. Through his careful brush strokes, she slowly became a wild animal that was just barely able to tolerate her tame surroundings.

And when he finished, he collapsed on the floor of his studio.

It was a quiet sob that came from the idea that he was finished and that his hands would never grace her image again.

She squealed with excitement at the news and announced she was on her way.

Her car soon roared to a stop in front of his studio. She burst through the door beaming that smile that bathed him in warmth weeks before.

He waited up front. He knew she would love it. He captured everything about her and poured it across the canvass.

Eventually she emerged from the back. There was no joy on her face.

“What’s wrong?” he said, shocked by her transformation from glee to despair.

Rage swept across her face and filled her voice.

“Whatever,” she said. “That’s not me. That’s not me at all. It look nothing like. Fuck. Seriously. You are an asshole. Real fucking funny, you know?”

He was speechless. She ripped into her purse and spilled cash across the floor.

She ran from him, letting the door to his studio slam shut behind her.

He was lost. He didn’t understand.

It was her. He captured everything about her. The brilliance. The beauty. The elegance. The grace. The dry humor. The way she quietly laughed under her breath. All of this and more. Right there. Painstakingly placed on a canvas. Just for her. As he had never done for anyone ever before.

But she couldn’t see it.

She could not believe the things he saw in her, the things no one else ever told her.

He died that day when she ran away. He became a walking corpse.

His art changed too. It became meaningless symbols and lines forced onto a canvass.

They sold because they matched someone’s couch or the colors fit with someone’s re-modeled bathroom.

Many customers made offers for the painting of the beautiful barefoot girl in the faded blue jeans and sheer Mickey Mouse shirt. His reply was always the same.

And, deep down, every morning when he rose from his bed he wished the buyer would come back, embrace what he saw as herself and take her portrait home.